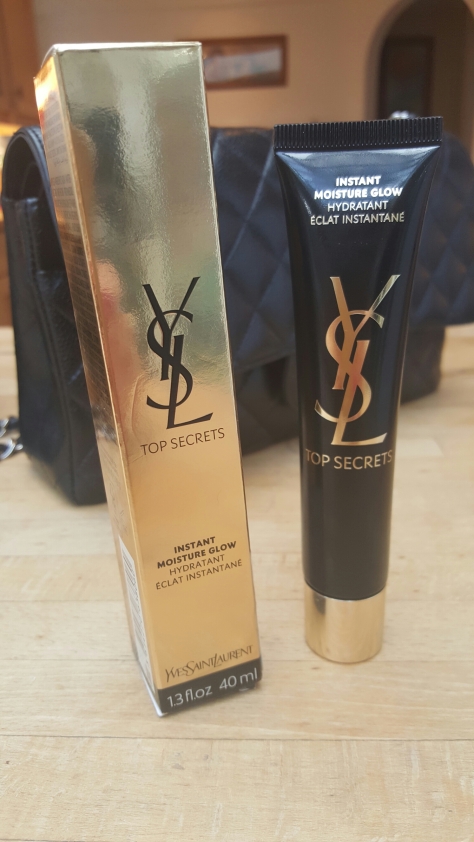 They say that there’s nothing new under the sun and I was inclinded to agree until I came across this little beauty.
I happened upon it last week when I was in Debenhams looking for something completely different. (Dior Spring 2016 Hi-Lighting Powder. Forget it. All gone. Gutted)Anyway,unable to get what I was looking for and wanting to purchase something to get over my disappointment,I wandered over to the YSL counter. I love their lip glosses and their packaging and I  wanted to see what was new. I had kind of seen this Moisture Glow stuff before but hadn’t paid much attention to it. It’s fairly new and I was probably looking for something else to get my greedy mitts on.

However, as I picked it up for closer inspection this time,the lovely sales lady said it was an amazing product if you’re on the dry side….AND!… according to the packaging, it delivers instant hydration for 72 hours and that the skin would look ‘plumped’ with moisture.

Music to my ears!

This I had to see!

Unfortunately for me, the moment I hit 40 my hormones decided to immediately start acting up. It was as someone had hit a switch and from that moment on my face felt like it had been vacuum packed.My combination/ dewy complexion was replaced by a magnetic black hole that sucked  up any moisture in its path,  rainshowers ,snow, the odd fountain.Possibly Niagra Falls if i was to stand close enough. It was like a Dry County and I  was left with a dehydrated husk that I have since battled with every day to combat. Oils, serums, primers, 8 gallons of water. You name it, I’ve tried it! And like my husband, it has to be fed regularly or it gets narky.

So, seeing something that claims to offer up 72 hours worth of hydration,no extra feeding required,it  was surely worth the 34 quid price tag.

So what’s it like?
Does it work in the same way as those little gel sachets that I put in my hanging baskets work? Does it act like a time release watering system?

Well fundamentally, it’s a primer. It goes on after your skin care and before make up.

It has a soft gel/cream, superlight,consistency in a very pale pink shade. The colour has no impact once it’s on your face. (Please excuse my dry, half tanned, 25 years of hairdressing  hands, it’s the best I could do)
You need a pea sized amount of this stuff, it literally melts and spreads onto your face like butter. It’s like an extra moisturiser. In fact, it’s so moisturising you could easily slip this straight on after your serum. Although I do suggest leaving it a good five minutes before adding make up, otherwise anything you do put on would probably slick straight off,or like me, end up collecting in your hairline. Not a good look.Go off and empty the dishwasher or something.Just be patient because, once the foundation goes on it really gives an almost flawless effect.

So did it last 72 hours?
Well, I didn’t have it on for that amount of time. But ,I will say that,yes, it did stand the test of at least 12 hours and the one thing that I really loved was how great my face felt after I’d taken everything off. The moisture was still there!!! My dehydration lines were definitely better. It was, dare I say it, plumpish and my foundation didn’t start to dry and cake in the way it normally would after 4 hours with a hairdryer in my hand.
I can’t recommend this enough for anyone who suffers from the dreaded dehydration. It’s like a lawn sprinkler for the skin with the added bonus of being a really great moisturising primer. It’s been worth every penny and it’s now on my MakeUpICan’tLiveWithout list .